> Worlds of Fantasy>Spawn of the Beast 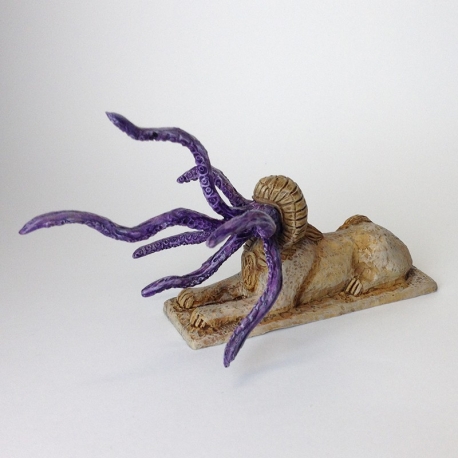 Spawn of the Beast

Spawn of the Beast for Cthulhu Roleplaying and Wargames

The Sphinx has many riddles, but the explorers of the desert did not expect this one.

'The face of the Sphinx shimmered, I thought it was the heat from the desert, a mirage, but then it grew black, a swimming mass of stars spinning into a vortex where the face had been, a shape formed in the blackness and the horror reached out from the other side, I escaped but only because I was not the slowest among the party. I feel safe now, the padding on the walls helps when my actions are uncontrollable, when I dream of the terror of the sands'.

This model comes in five resin parts and requires assembly, best to use superglue. The model is about 20cm from tail to tip of the tentacles.

Supplied unpainted and investigator models are shown for size only and are not included.